It’s during “My Own Version Of You” when the heated, almost tangible atmosphere from the stage becomes overwhelming, a vortex pulling you deep inside one of Bob Dylan’s most majestic performances. Rough And Rowdy Ways’ weirdest song is like nothing else even he has written, with Bob as a romantic Dr Frankenstein haunting morgues, and hauling in Liberace and Karl Marx for questioning. He sings it gently at first, but with savage certainty. The staccato, tense music closes claustrophobically in, Dylan’s piano recalling the vengeful tolling of “Ballad Of A Thin Man” as he pulls the rhythm tight then punches it home as a brimstone blues, matching the hellish lighting playing on his face. He barely has to raise his voice to mesmerise, commanding every aspect of his genius, as he does for most of this memorable night. 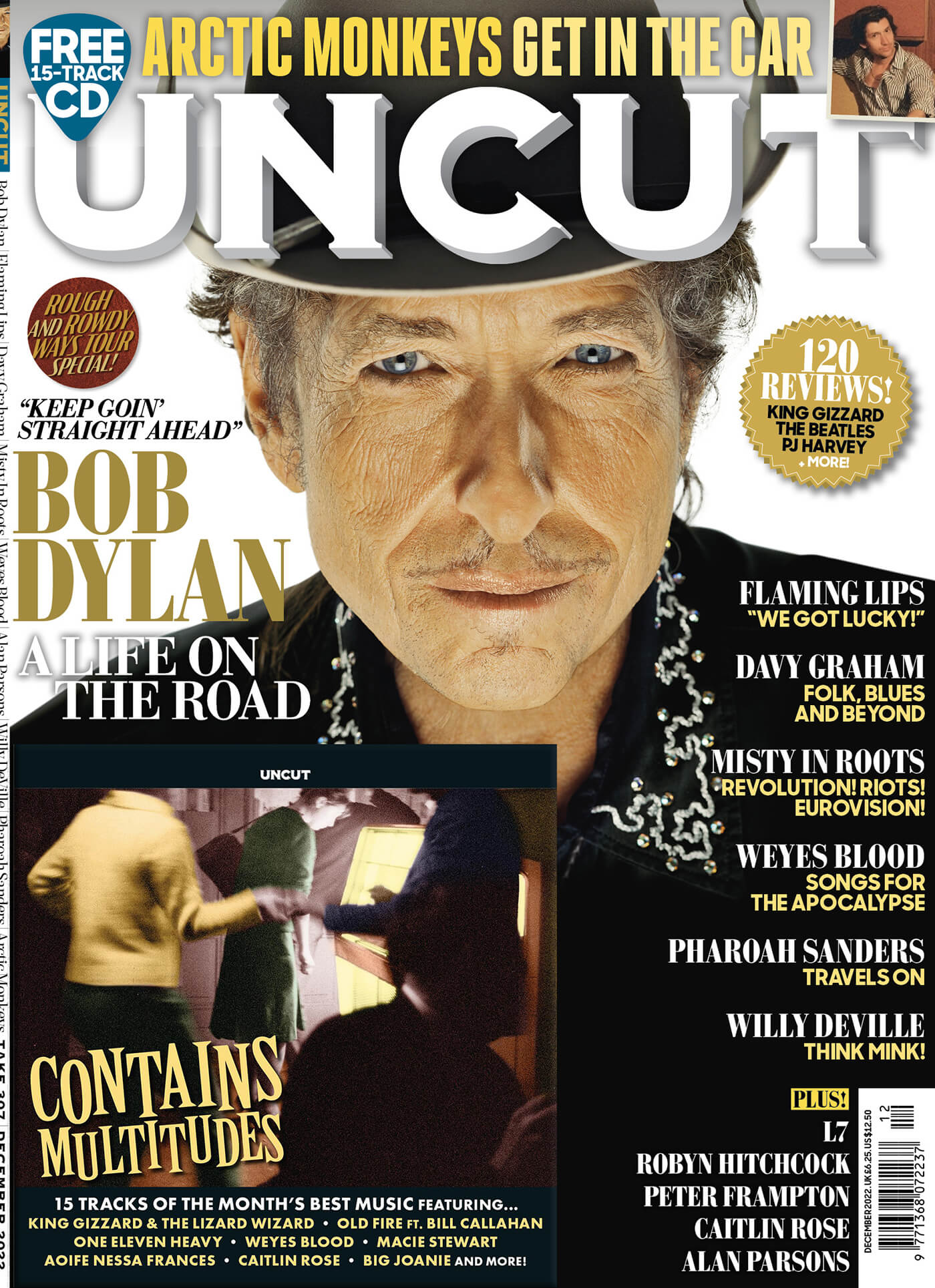 Two hours earlier, in a city-centre pub yards from the venue, two men in long black coats, Stetsons pulled outlaw-low over their faces, stand out from the after-work crowd: veteran Bob bassist Tony Garnier and new guitarist Bob Britt, settling in before the show. Inside Oxford’s art deco New Theatre, there’s a gathering of the tribes, with legendary Roxy/Pistols producer Chris Thomas and Richard Ashcroft among them.

In the smallest venue on this UK leg of his current European tour, the band are a widescreen presentation, filling the stage beneath the red-and-white proscenium arch, and lit from below like ‘40s Hollywood players. Dylan wears what looks like a black velvet outfit, jacket open to a black-and-white shirt matching the two-tone shoes glimpsed tapping beneath his stand-up piano.

When I saw Dylan in Stockholm, for the second night of this tour, when he conjured magic from a sterile, sparsely populated arena. The setlist is identical yet every song is different, some evolved far beyond Rough And Rowdy Ways, a great album which has become a first sketch for ever-changing business.

Even the night’s only, minor mid-‘60s gem, “Most Likely You Go Your Way And I’ll Go Mine”, is dismantled and rebuilt by Bob on the spot, his pauses between the title phrase’s two halves comically canyon-wide. He’s fully alive to fans who, in this relatively intimate space, repeatedly roar him on, adoring his new music and adding to the close, intense atmosphere. “I’ll Be Your Baby Tonight” is greeted like a great hit, Dylan letting the title phrase hitch and stutter, further revving the response.

Drummer Charley Drayton, who mostly plays with a brush and single drumstick, meanwhile switches from a jazzy snap and simmer to a slow, swinging blues whomp. The former Miles and Keith Richards sideman is almost invisibly indispensable to the remodelled band, and attuned to Bob’s improvisatory vibe. Bob Britt takes Charlie Sexton’s place as a chiselled, matinee idol guitarist. When a Western swing version of “When I Paint My Masterpiece” gets its rhythm compacted to a challenging mangle in a sudden swerve of Dylan’s pianistic mood, old hand Garnier grins delightedly, while Britt watches Bob on tenterhooks, mouth agape.

Tonight, the songs on Rough And Rowdy Ways find common ground with earlier albums. “Black Rider” taking on Time Out Of Mind’s swampiness. A sly and slinky “Goodbye Jimmy Reed” emphasises old, weird conversational lyrics which recall “Lo And Behold” from The Basement Tapes, before Dylan’s piano turns a hard corner into a suddenly conjured, wholly different song. “To Be Alone With You” could be from Modern Times, not Nashville Skyline, garlanded by Donnie Herron’s violin, and fresh lyrical mystery: “What happened to you, darling? What was it you saw?”

Some songs are big enough to morph several times as they unfold. “Gotta Serve Somebody” starts smoky, then becomes the night’s sole rock song, Britt’s rhythm and Doug Lancio’s lead guitar building an electric storm which twists into updated rockabilly, where teenage Bob came in. “Key West (Philosopher Pirate)” has misplaced its original tune, Drayton’s rolling, thunderous bass-drum making it sound like a great Oh Mercy out-take while Britt slips in a psychedelic filigree, and words and music quote Bob & Earl’s “Harlem Shuffle”. Dylan’s eyebrows are arched and eyes humorously wide as he leans into the mic on particular syllables, happily spilling the secrets of the song’s Shangri-La. He gives a wolfish grin in the old Hollywood light, barely raising his voice as he casts his spell, and gets his first standing ovation.

Dylan sometimes lets his old songs’ words be swallowed by the music, but the arrangements clear so every new, richly allusive line lands to be studied in this student city, just as they were a half-century ago, when new works were valued as wondrous revelations. Rough And Rowdy Ways stands the comparison, deep and dense enough to sustain this mooted four-year world tour.

Those songs are steeped in their 81-year-old writer’s profound experience. Over Herron’s mandolin shivers, this phrase from “I’ve Made Up My Mind To Give Myself To You” carves the air tonight: “A lot of people are gone/People I knew”. The first line is an elongated croon, the second implacably blunt, Dylan’s hard truths still serving an audience who, like him, have lived to see loved ones lost. “Mother Of Muses” is a mystical prayer for the 20th century, linking World War Two’s victory to Presley’s, and honouring Martin Luther King, who the man onstage knew and sang for in 1963. “Man,” he sings with relish, “I could tell their stories all day”.

“This is a great place to live,” Dylan tells Oxford as his closing harmonica solo on “Every Grain Of Sand” fades. “I wish we lived here!” A tumultuous standing ovation sees him return for a frail, shimmying curtain call, hand defiantly on hip. The sheer artistic and physical heroism of an artist touring such proud new work aged 81 is movingly clear. It’s Bournemouth next, though, Bob’s job far from done.