W.A.S.P.‘s headlining concert at Amplified Live in Dallas, Texas Saturday night (November 5) was reportedly shut down by the Dallas Fire Department just prior to the band taking the stage as the almost-2,000-seat capacity venue was allegedly oversold by almost 1,200 tickets. Support at the concert was scheduled to be provided by the MICHAEL SCHENKER GROUP and ARMORED SAINT.

Earlier today, the responsible promoter for W.A.S.P.‘s concert in Dallas released the following statement via the band’s social media: “After the dust settled in Dallas we wanted to make a clarifying statement letting everyone know that Amplified Live did not intentionally over sell the show. There was a clerical error on the venue capacity certificate that didn’t include the entire outdoor venue space. When they rebranded the venue they were issued a new certificate with this omission. While that area is clearly venue space, the Dallas Fire Dept had no choice but to shut down the show because of that reason and the venue will be having a new certificate issued ASAP. Again we are sorry for what happened”.

On Sunday, W.A.S.P. frontman Blackie Lawless said in a statement that the Dallas Police Department advised him and his bandmates and crew “to leave the venue immediately because they said they could not guarantee our safety.” He went on to say “promoters didn’t think this band could sell tickets in the U.S. anymore. Well, it goes to show the absolute dedication of our fan base has here in the U. S.”

No makeup date has been set for this show, but Blackie promised: “We’ll certainly be back. You can bet on that.”

All those in attendance will be issued a full and complete refund.

W.A.S.P.‘s first U.S. tour in a decade coincides with the band’s 40th anniversary.

Speaking to the “Appetite For Distortion” podcast, Lawless explained why he and his bandmates were absent from U.S. shores for so long. “The fans did this,” he said, referencing the band’s current trek. “I’ve never seen anything like that. Promoters didn’t think this band could sell tickets anymore. We were being offered stuff that wasn’t very good, and we didn’t wanna do that because the production that we wanted to do was way bigger. And so I just started telling the truth. I said, ‘Hey, it’s down to promoters.'”

He continued: “Any band — and I don’t care who it is — any band will go anywhere if a promoter gives them a decent offer, and that’s true. And so I told the fans, I go, ‘Hey, let your local guy know [to hit us up with a decent offer].’ It was almost like a passing thought — you know, ‘This will never happen in a million years.’ Well, a couple of hundred of ’em literally got together and started petitioning, and then that grew into thousands of people, and they started literally rallying to petition their local promoters. And it brings us to where we are now. But I’ve never heard of anything before or since that was like that. So I guess it goes back to the old adage: don’t let people tell you that you just being one person won’t make a difference, because it did. That’s the absolute truth. I’ve never seen anything like this before.”

W.A.S.P. recently postponed its European 40th-anniversary tour, originally scheduled for spring of 2022, until the spring of 2023. The new dates will take place in March, April and May of 2023. All tickets previously purchased for the 2022 tour will be valid at the rescheduled 2023 shows.

Lawless has led W.A.S.P. as its lead vocalist and primary songwriter since its beginning. His unique brand of visual, social and political comment took the group to worldwide heights and sold millions of records alongside a legacy of sold-out shows across the globe for four decades. He is joined in W.A.S.P.‘s current lineup by bassist Mike Duda and guitarist Doug Blair, whose tenures in the band span 26 and 18 years respectively, along with drummer extraordinaire Aquiles Priester.

Update from the promoter in Dallas, TX: “After the dust settled in Dallas we wanted to make a clarifying statement…

The Dallas, TX promotor oversold tickets for the show tonight at Amplified Live. The Fire Marshall showed up & informed the promoter that the show would not happen unless they removed 600 people from the venue. The band deeply regrets the issues brought on by tonight’s promoter. pic.twitter.com/LYpTgDchhP 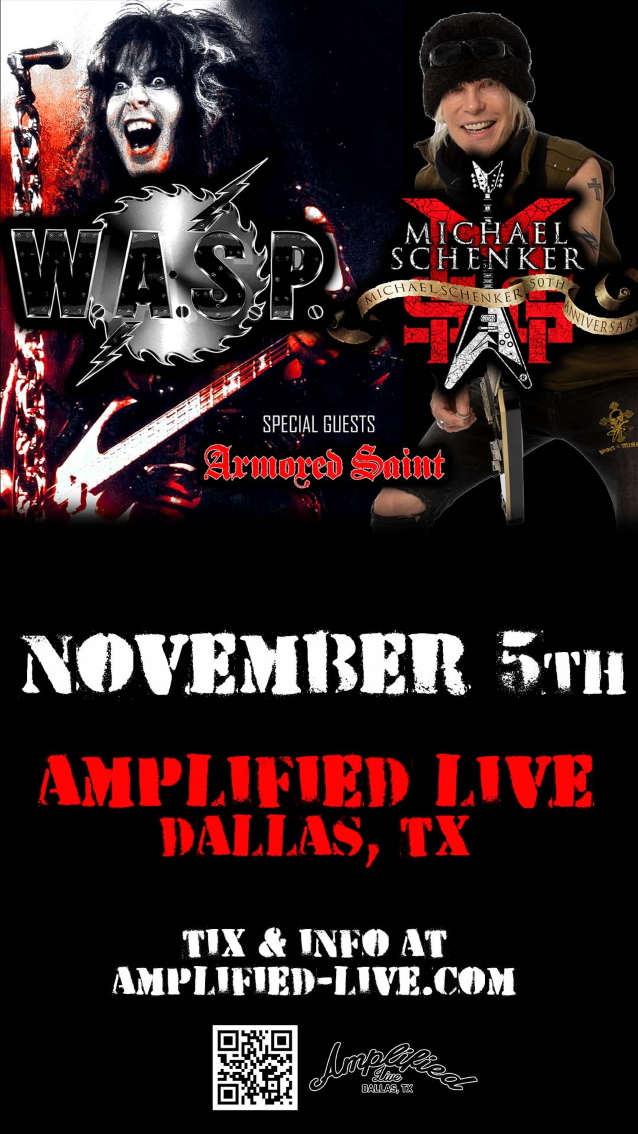