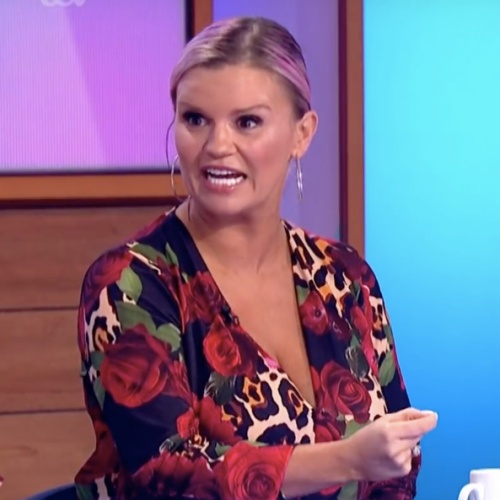 Kerry Katona spoke to Jackie Brambles on her Greatest Hits Radio show tonight (Wednesday) from Turkey. The former Atomic Kitten was abroad with her family as her sister gets ‘some Turkey teeth’ and to enjoy some winter sunshine before she returns to the UK. Kerry spoke candidly to Jackie about her latest memoir Whole Again – Love, Life and Me: My Story in which she details her violent marriage to third husband, George Kay, who passed away in 2019 following a history of mental health issues and drug abuse.

Jackie asked Kerry why she felt she had to write this book: ‘It’s for domestic awareness abuse. I was in a really violent relationship with my third husband George, who sadly passed away three years ago, and it’s just a tale of strength, resilience and hope. It was the most difficult book I’ve had to write [Kerry has previously published two other autobiographies] and I was quite traumatised by it, I’ve had to get therapy which I’m still in at the moment. I thought it would be therapeutic, but it hasn’t been – halfway through I thought ‘I can’t do this anymore, I’m done’. I felt I can’t put it out there because there’s such a sense of shame and guilt with abuse but in the end I thought if it helps just one person then it’s been worth doing.’

On her own mental health struggles and how they are portrayed: ‘It annoys me how we’re put into a box – because I’m from a council estate, had a certain kind of upbringing, the fact that I’m a woman and a mother you are judged massively differently. For instance, I applaud Ant McPartlin’s recovery. I think he’s doing amazing and I love Ant & Dec, I think they’re great. But Ant had his own issues, when he crashed his car it was a big, big story yet eight months later he’s winning awards and it’s all forgotten about. How many years later (from her This Morning interview where she was accused of being drunk on air) and we’re still talking about it with me. Because I’m a woman, and because I’m a mother, and because I didn’t go to Sylvia Young theatre school you are put in a box – that’s how it is unfortunately. I feel like I’ve been a beacon, got the beating for a lot of people but that is how women in this industry get treated – look at Caroline Flack.’

Kerry on finding fame with Atomic Kitten: ‘That very first time you hear your song in the charts, you see yourself on the telly, in the papers or in a magazine and people start shouting your name – that for me was amazing, that climb. Doing all the rubbish gigs, in clubs where people throw bottles at you and no one knows who you are. We did a South East Asia tour for six weeks and we all ended up in hospital we were so knackered. We worked so hard but the climb for me was amazing just when you get there it’s not what I expected.’

On how that fame defined the rest of her life: ‘Let’s be honest I was in a girl band for a minute and they went on to have so much more success without me. I wasn’t bitter at all, I wasn’t jealous – well maybe just a little bit! – but they went on to do so much more than I ever imagined and I was so proud of them. But even though I was only there for a minute the fame just stuck with me and my personal life took over more than anything. It’s been a long run – 26 years now – but it’s only in the last ten years that I’ve been able to use that fame to my advantage and not let it bother me.’