Christian rockers STRYPER were forced to perform their concert Saturday night (November 5) in West Hollywood, California with two battery-powered practice amps, one snare drum and three members of the band singing a cappella after power went out at the legendary Whisky A Go Go club.

On Sunday (November 6),STRYPER frontman Michael Sweet took to his social media to share a photo from the venue, and he included the following message: “Well, that was a first!

“The power went out on Sunset last night 30 minutes before our set and we went out on @thewhiskyagogo stage and rocked with 2 battery powered practice amps, 1 snare drum and 3 acapella vocals to a second night, sold out crowd!

“You can’t stop The Rock.

“The power came back on 30 minutes after our set.

“What an amazing night and we love you all!!!

“It was one for the books……

“The light always shines in the dark”.

Last month, Michael once again claimed that STRYPER was never a “Christian” band despite the fact that the lyrics in a number of STRYPER songs explicitly point to Christ. During an interview with Effect Radio, the 59-year-old guitarist/vocalist, who is STRYPER‘s primary songwriter, explained: “Everybody knows where I stand on that term, ‘Christian rock.’ I’ve never really understood that term. We’re a rock band comprised of Christians. We are Christians, we are believers, we have a deep faith and we’re so honored to be able to tour the world and share that with people. And it’s such a blessing. God has really blessed the band over the years. And we’re looking at almost 40 years. And it’s pretty amazing that the band is still thriving and still doing really well. We just performed to two sellout crowds in Costa Rica and Colombia, and whenever I go out on the stage and I see that, I’m in awe. I mean, I’m just thinking to myself, ‘How is this possible? This is amazing.’ And that’s a God thing. It’s incredible.”

He added: “With the term ‘Christian rock band,’ a lot of people who aren’t Christians aren’t going to come see you — they’re not gonna come see you. So, isn’t that what we’re here to do, is to reach people that aren’t Christians? So why would you wanna limit yourself by saying ‘we’re a Christian rock band.’ It’s not to discredit what we stand for, who we stand for. We are firm believers in Christ and we’re so proud to stand for Christ.”

Even though STRYPER‘s third album, 1986’s “To Hell With The Devil”, made Sweet and his bandmates the first contemporary Christian act to score a platinum album, the group has often felt unwelcome in Christian circles, with some members of the church feeling that Christianity and heavy metal are incompatible.

“STRYPER was certainly not the norm,” Sweet told Effect Radio. “We broke down all barriers… You can look at a video of us performing at the Dove Awards [which honors outstanding achievements and excellence in Christian and gospel music] in 1986, and I’ll never forget the look on some of the people’s faces when we performed. It was that deer-in-the-headlights look.

“I don’t even know what’s going on with STRYPER. All I know is God’s used us and continues to use us in a powerful way to reach those that need to be reached. And that’s all that concerns me. And we’re gonna keep doing it until God tells us to stop.”

In a 2018 interview with the Detroit Free Press, Michael said that STRYPER was never fully embraced by the heavy metal and hard rock communities, largely because of the band’s Christian lyrics.

“We’ve never been accepted by either side,” he said. “The secular side, the mainstream, they’ve never accepted us to this day. We’re probably that band that everyone’s going to go to whenever there’s a time to mock. We’ll be the band used for that in most cases. Now on the Christian side, we’ve never really had the full support of the Christian side because we don’t fit into their little club. We’re not wearing suits and ties and going to every church and preaching.”

Formed 39 years ago, STRYPER‘s name comes from Isaiah 53:5, which states: “But he was wounded for our transgressions, he was bruised for our iniquities: the chastisement of our peace was upon him; and with his stripes we are healed.”

STRYPER‘s albums include “To Hell With The Devil”, “Second Coming”, “No More Hell To Pay”, “Fallen”, “God Damn Evil”, “Even The Devil Believes” and the band’s latest effort, “The Final Battle”. 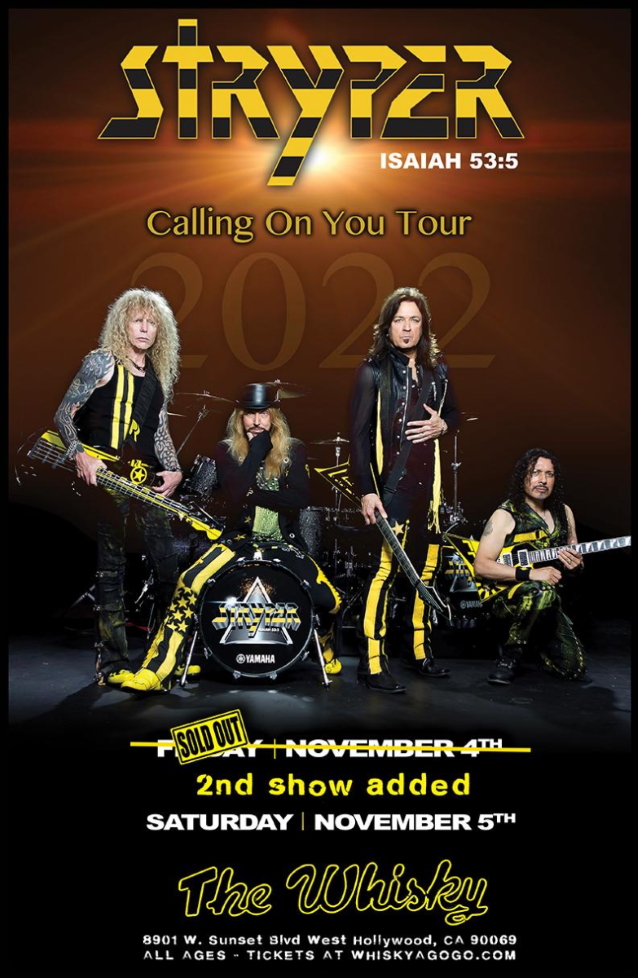